All posts in Uncategorized

My latest body of work has been exploring various ways to document performance. Many of my performances are inspired by stories that are told, and the documentation of these performances are yet another story, another layer. I presented a series of reliquaries at the RSA’s New Contemporaries, and the Fleming Gallery’s New Scottish Artists exhibition in 2014. These sculptures use the physical remains from my performances to expand from their origin. By utilizing the relic mythos I was able to present a new performance – The Onion Procession. I really enjoyed the concept of a reenactment performance and am exploring this theme further.

I was awarded a New Graduate Award with the Society of Scottish Artists and was part of their annual exhibition at the RSA in December. I created a new work, Nail Soup redux, based on the performance from my degree show. Nail Soup, also known as stone soup, axe soup, and bone button borscht, is a children’s fable found in many cultures. It tackles the theme of food scarcity and the importance of community. The original performance was a celebration of the Dundee arts community. I approached 15 arts organisations asking for supplies needed – hobs, pots, bowls, spoons- and they provided everything needed to cook and serve (and clean up after) the soup. The members of the community brought the vegetables, oil, spices, and side dishes. We all feasted together.

Nail Soup redux was my second reenactment performance. I made cardboard replicas of the original props for the performance. I wanted to explore the idea of art community, how that can change within a gallery setting, and what can be lost and gained within various spheres. I was not present at this reenactment, as my immigration status would not allow me to stay in the UK. I was supported culturally by the art community I found when I moved to Scotland, but without the support of government policies, I had to leave. The final work I made in Scotland, developed during Hospitalfield Arts Graduate Residency 2014, had a tiered price offered at various visa values. In the end it didn’t sell and was thrown into a skip. Se la vie, time continues, but how does this increased immigration reform effect the vibrance and diversity of the Scottish art scene?

What year is this?

The school year is nearly over! I am making an Iceberg (sculptural; out of foam)
Here is what it looks like outside and inside.

I will put up more pictures once it is finished.

I have been making zines – Dundee had it’s first Zine Fair – and The Satallite Zine (DJCAD’s – which I am currently editor of) made enough to get a long arm stapler.

The skies in Dundee have been getting lighter and lighter. I want to spend lots of time outdoors this summer. I am SO behind on editing for Sylli G and my own projects! I better get on that – somehow there are always tons of exciting things (or dissertations) that take precedence. Perhaps with a long enough extension cord I can do both.

I really intend to keep this up more regularly. 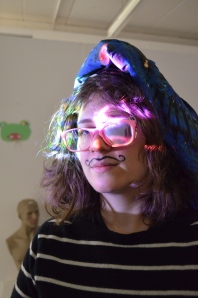 Hello  – So a lot has happened. I guess that is normal when my last substantial post was nearly a year ago.

Flight School went fabulously. I learned so much and met many great people. It really made me appreciate Pittsburgh, and then I left.

I finished my .gif a day in January. You can find them all at vermiciouskid.tumblr.com   Here is one of my favorites:

I made it to The Vermont Studio Center in May. I met many more great people and worked primarily on two things:

1) Writing, storyboarding, and filming for my first stop-motion video. I wanted a project to learn how to  use Final cut pro. As I am always in the mood to challenge myself, a simple little stop-motion seemed perfect. I ended up shooting it all in one day (one night and another bit of dawn) to catch some sunny Vermont weather. Here is the completed movie (I did the sound recording in Scotland) :

2) Applying to two Universities in Scotland. I was moving there after the VSC residency, so I hoped to find a way to stay after my visitor visa expired. I had help from folks in Pittsburgh and Vermont and it worked – I was accepted to both places. I chose Duncan of Jordanstone in Dundee.

I spent the summer in Edinburgh with Jonathan. The city is beautiful. I walked all over the place – Arthur’s seat, Calton hill, the castle, and the water Leith. My mom visited for a week during the Fringe Festival and we had a blast. I also made a commission for my friend  Justin Lim – a sweet hoodie for his performance in Kuala Lumpur. I visited friends in NYC while getting my visa. I also visited the garment district in search of spandex and sequins and found more than I could ever want for. I even survived hurricane/tropical storm Irene.

Dundee is great. University is really fun – being around a ton of artists and not having a day job. I have been hanging out in the printmaking workshop all the time. I have been silkscreening, etching, did my first waterless lithograph, and made the whole place smell like curry during an experiment. I also joined a performance group. I am one lucky lady.

How is it April already!

I have been very busy – making art, applying to grants, residencies, shows, getting ready for the Vermont Studio Center in May, and a relocation to Scotland in June. Wow.

Hello. I did a few things this year. The most apparent to me right now, is my attempt to learn to touch type Dvorak. I am at twelve words per minute – which is real slow.

I worked a bunch and got my crown in January. Not very fun, but important. Jonathan and I had our one year anniversary – whoo hoo.  For the first quarter of the year I had art in three group shows. I made some drawings for a zine – inspired by falling down an icy flight of steps and watching too much of the tv show House.

April was the start of a great season.  Jonathan and I started work on the garden. We turned over the backyard, that had been sheet mulched all winter, and made three rows to plant our seedlings. I quit my food service job, had a week off and then started my illustrious career as a Census Enumerator. (by career I mean Summer Fling with a Govt. Job)

Jen moved out, I watched two seasons of Drag Race in a week, on the internet, while hot glueing two massive fabric banners for my show at Morning Glory Coffeeshop in May. In June I worked on house stuff, Censused a ton, and got my pool pass. Jonathan and I visited Baltimore to see our friends (one of which was super pregnant) and hung out with J’s mom at the American Visionary Art Museum.

Summer was Hot. I drank lots of iced coffee as I made my way around different Pittsburgh neighborhoods with my Census bag, clipboard, and buddies; We swam in the river whenever we could, or went to the pool, after finishing all our work of course. July 16th was my newest friend’s birthday, and I got to meet her when she was 10 days old . In July I also made a four page comic with vinyl stickers. It was fun – but so slow. I will give you a sneak peak – it will be part of a book on extra terrestrial sexuality that comes out in 2011.

In August my Census days were over. I had some time to work on the garden. I spent some time working on puppets for an independent movie. I helped build some sets, puppets, and was a puppeteer in the movie. It should be out next year. Jonathan moved into my house too.

September was busy- Carlee moved out – still making puppets,  art show,  sweet Burning Man costume commission, still working at Paul’s Cds. October was another great month. It started with a hell of a weekend – VIA – great music, games, lights, lasers, food, dancing on stage, and lack of sleep. I had a movie shoot with the puppets Sunday after only two hours of sleep – when the shoot was over we ate a nice meal – and then went to VIA again for more music. Jonathan and I went to Seattle for my Grandma’s 80th birthday. It was great – I went to the Korean Day spa with my oldest friend, hung with Highschool buddies and ate tacos, and had a delicious Chinese banquet to celebrate my grandma . When we got back to Pittsburgh I had an interview and got accepted as the intern for the Flight School Fellowship. This internship is teaching me so much – I am gonna be so smart when this is over next April.

So now it is becoming Fall, stuff is happening, I have a little time on my hands, so I start researching Home Masonry and get to work on my basement. I got a letter in November. At first I was bummed out. I got into a residency at the Vermont Studio Center – but I would have to pay over $2,000 to attend. I wasn’t thinking about how awesome it was to get in, because I figured I wouldn’t be able to go. Then I was recommended by friends to do a kickstarter project. Oh Dang! I made a video, told all my friends, and people hooked me up. I was able to make my goal to pay for the residency- and make some new art for people. One drawing is below: I met J’s extended family for Thanksgiving and hung with the Baltimore Buds. I turned 30 on December 1st. For the rest of the month I kept on working in the basement, at Flight School, doing kickstarter, and staying warm. I learned enough basic html and photoshop to make Gifs. My Fun a day for 2011 will be a making a gif each day in January. There are a few more days left this year and I will be socializing with out of town guests. Life is good. I am learning so much and getting more into “this here 21st century.” I still don’t have a cell phone, but here concludes my first blog post.